Skip to content
Home/Kettlebells, Movement, Strength & Conditioning/The Turkish Get Up: Part I
Previous Next

The Turkish Get Up: Part I

The Turkish Get Up: Part I

The Turkish Get Up (TGU) is an exercise with a long and rich history. It was a staple of old time strongmen and strongwomen. “Legend has it that old-time strongmen taught apprentices the turkish get-up and told them to come back when they could do it with 100 pounds.” (1)  Or, what us giryas refer to as taming the beast (48kg – 106 pounds)! 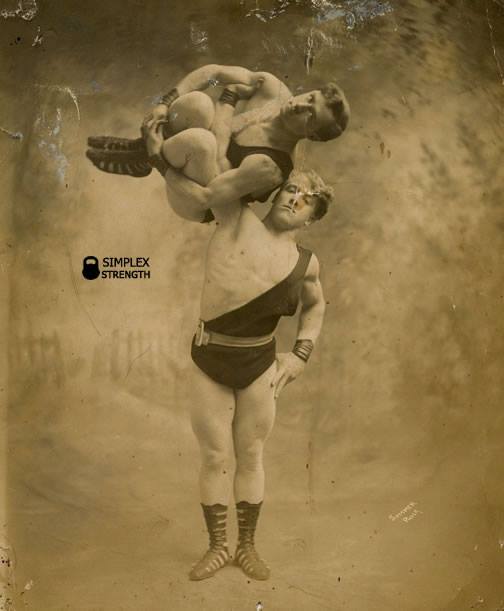 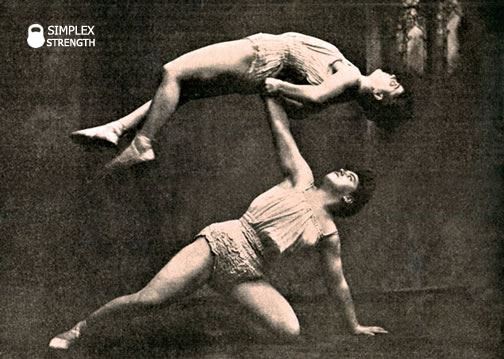 In Kettlebells From the Ground Up (2), Dr. Mark Cheng, Senior SFG, explains that the roots of the Turkish Get-Up are from the grappling traditions in Central Asia. This exercise reinforces fundamental movement patterns, and builds strength & coordination – a need for individuals engaged in combative arenas whose priority was to outlive their enemy.  “If a wrestler was able to control a heavy weight from a supine position to the overhead lockout position with absolute confidence, that signaled a landmark in his development.” (2)

That’s the beauty of the Turkish Get Up. It’s intended to be done slowly with control and precision. That’s strength!

Neurodevelopmental Patterns From The Ground Up 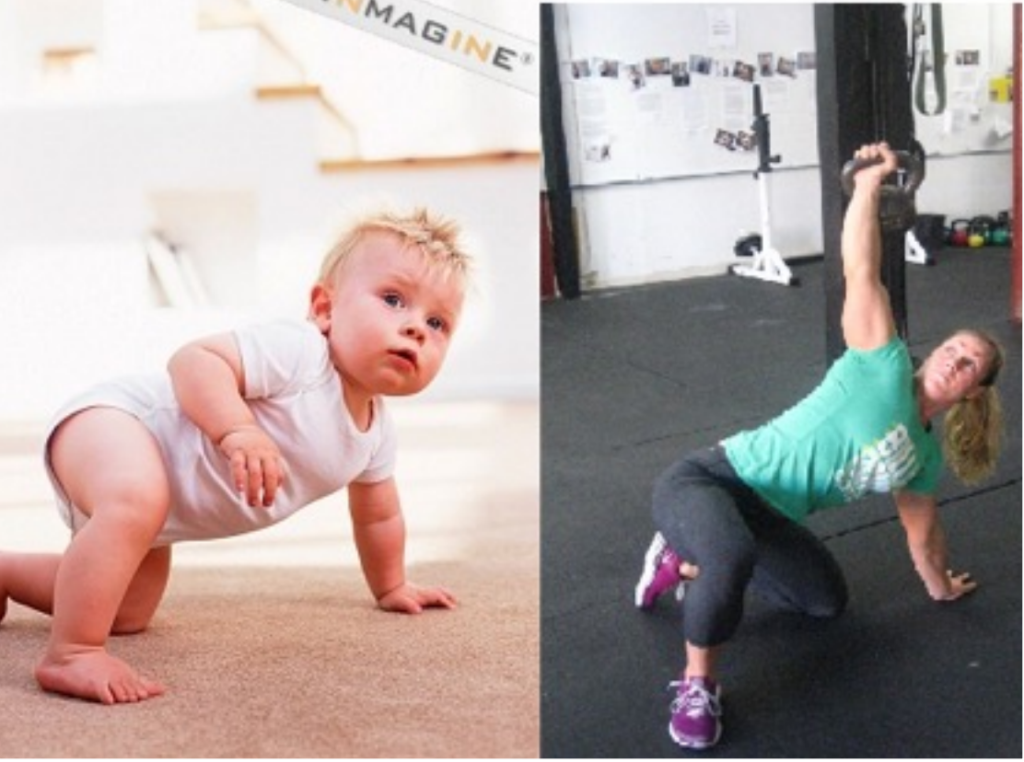 A baby’s movement patterns and the Turkish Get Up are the SAME! | Photo courtesy of Perry Nickelston & Stop Chasing Pain

There is something incredibly innate about the Turkish Get Up to human beings. There are many movement patterns (rolling, hinging, lunging to name a few) that are integrated within this exercise. The Turkish Get Up helps to retrain these patterns under load while simultaneously demanding correct alignment, posture, and integrity. When alignment is broken, the weight provides feedback to correct it. As Gray Cook has said, “Heavy weight is instructive.” (1)

The Turkish Get Up May Just Save Your Life

Last year I attended the RockTape FMT Certification led by Dr. Perry Nickelston. During the weekend he shared a slide that posed a though provoking question : “Can Movement Project Your Longevity? (3)”

The answer is YES!

In 2012, the European Journal of Preventive Cardiology shared a scientific paper titled “Ability to sit and rise from the floor as a predictor of all-cause mortality”. (4)  This study showed a critical parallel between a person’s ability to go from a standing position to a seated position and back to standing. An inability to perform this movement pattern sequence correlated to a 6.5x greater chance of dying in the next 6 years.

Furthermore, the Center for Disease Control lists some frightening statistics when it comes to falling (5):

The most important takeaway to remember:

“Many people who fall, even if they’re not injured, become afraid of falling. This fear may cause a person to cut down on their everyday activities. When a person is less active, they become weaker and this increases their chances of falling.”

Fear, even at a subconscious level, changes movement. Learning control and moving slowly can remove this fear as well as build strength. How much more confident do you think any individual will feel about falling and being able to get up again if they can do it with a heavy weight overhead? We aren’t just talking about building strength, we are talking about improving our quality of life!

Now on to a step by step breakdown of the first half of the Turkish Get Up. Note: The first two steps are identical to the kettlebell arm bar. If you are not competent doing that movement with weight, I strongly recommend starting with bodyweight only and learning the pattern first. 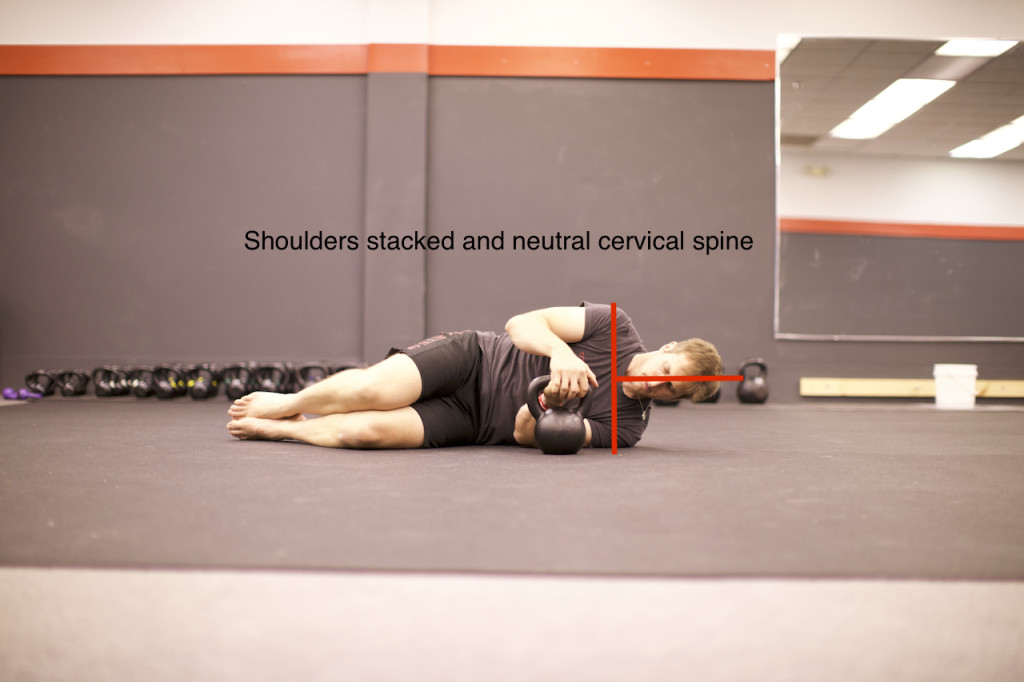 Proper Set-Up Position for the Turkish Get Up

The Roll to Press 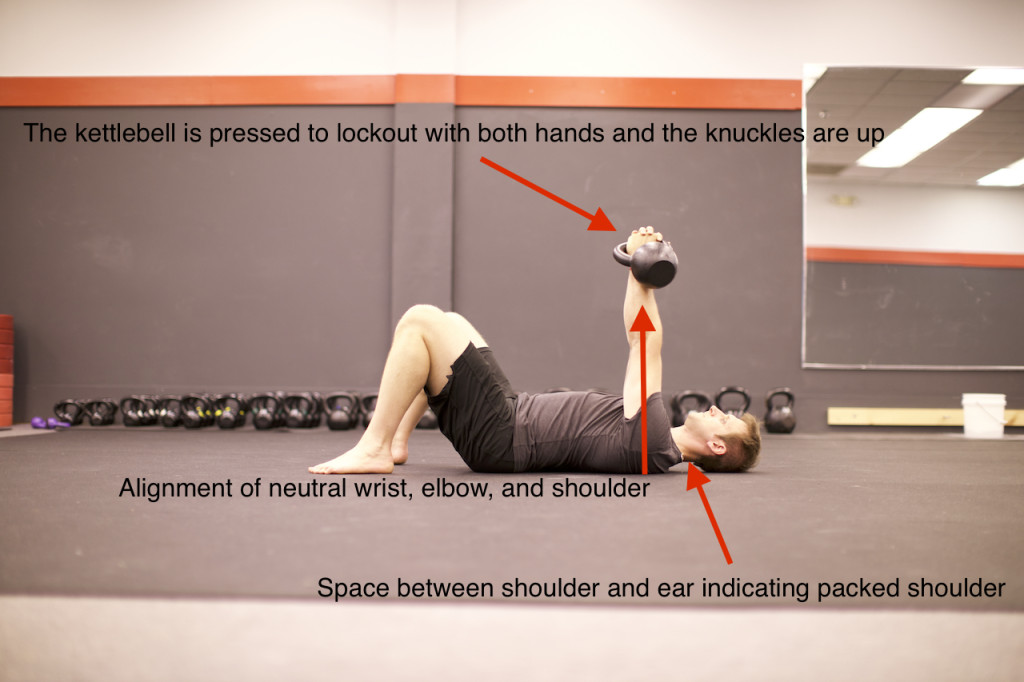 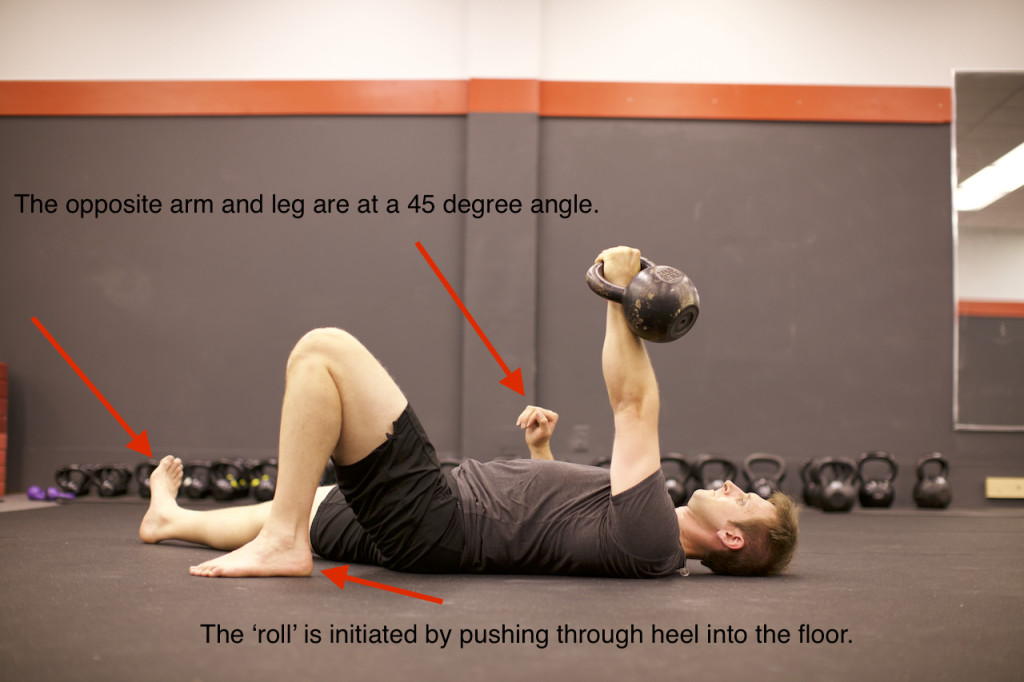 Final positioning for the Roll to Press position in the TGU

This step is very often misunderstood. It is not a sit up. As Dr. Mark Cheng says poetically it’s a “roll under the kettlebell.” (2) If you are having difficulty with this I strongly recommend going back to the SFMA rolling patterns. This suggestion was made to me by my friend and mentor Brent Morehouse and was reconfirmed during my training for the SFG. Here is a video I shot of the rolling patterns – fast forward to the 6:25 mark. 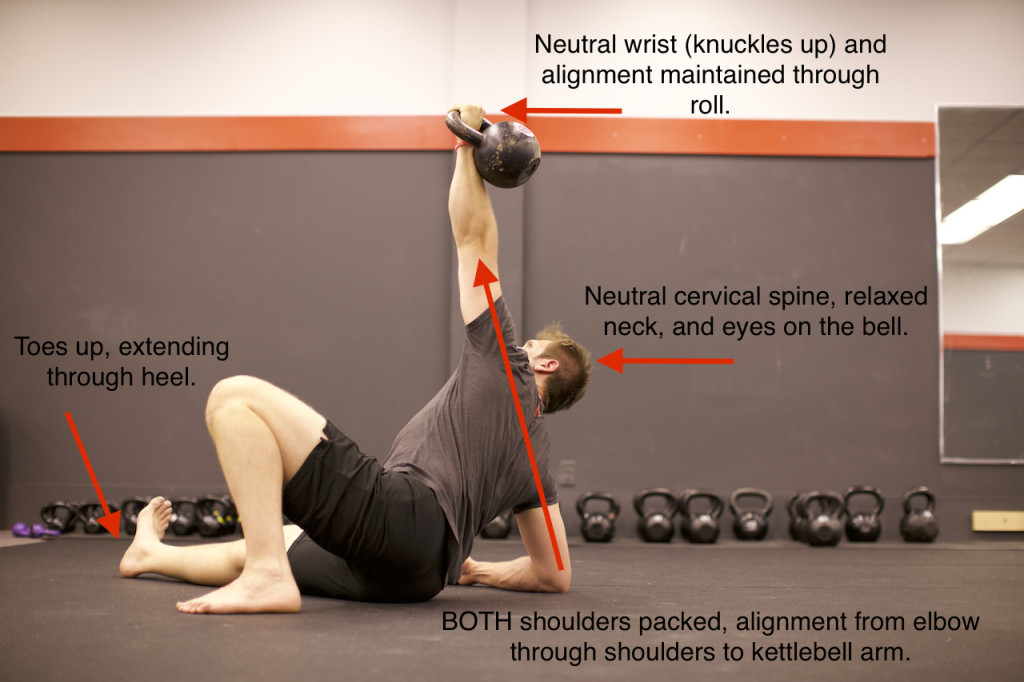 Step 2 of the TGU | The Press to Elbow 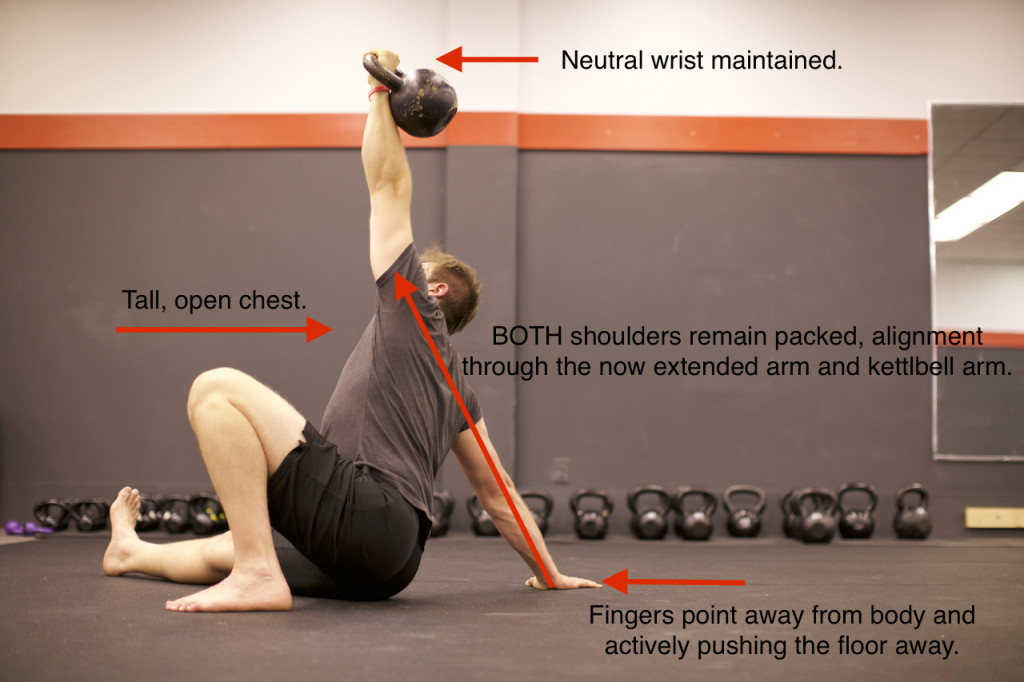 Now, there are a ton of ways to progress with the sweep which I cover in full detail in the video. You can do either variation of the low sweep which is what is taught by StrongFirst. The high pelvis is an alternative to the low sweep version. ALL of them are great to do. However, the high pelvis is considerably more challenging to do because your inserting a bridge into the middle of the Turkish Get Up while under a heavy load and maintaining alignment and breath. No easy feat – so progress to that version slowly with a kettlebell. 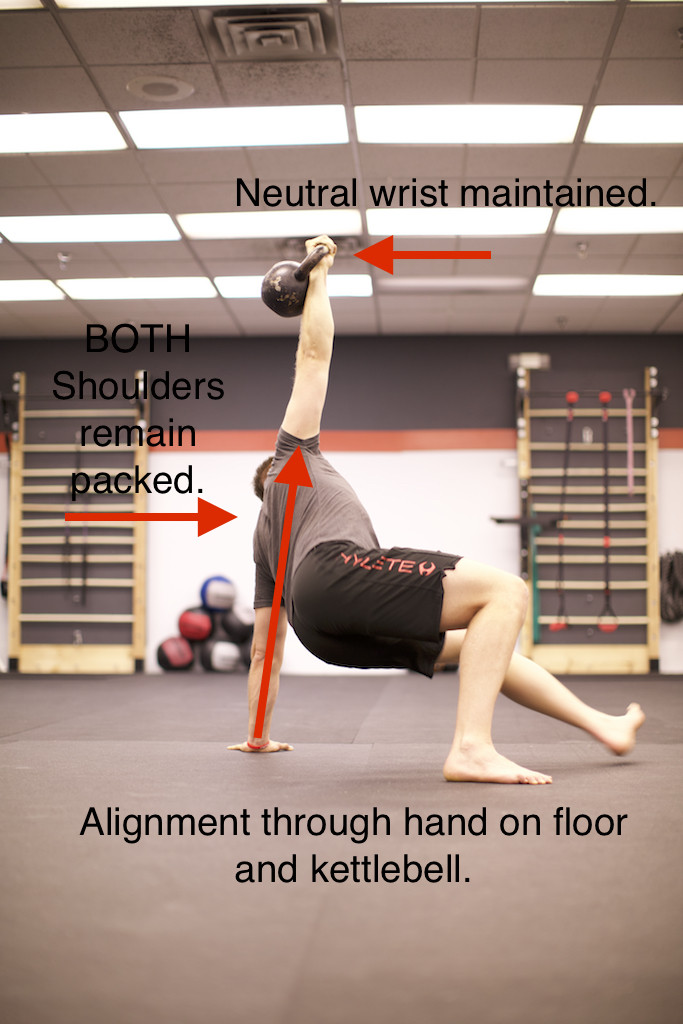 The Transition from Tall Sit to Sweep in the Turkish Get Up. 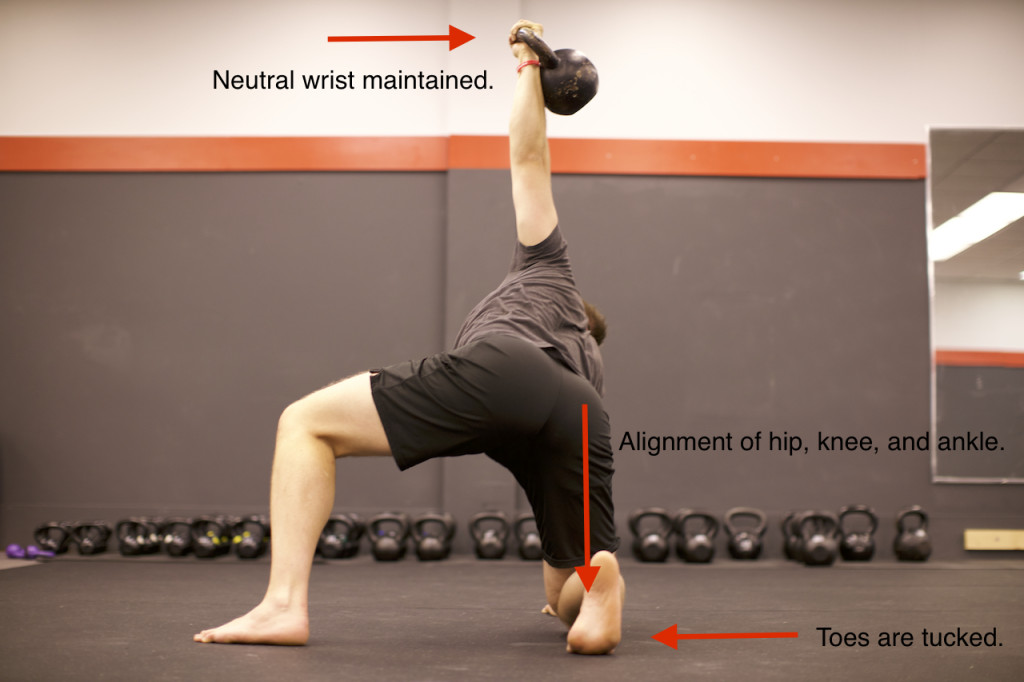