The Intrinsic Core, also known as the Intrinsic Stabilitzation Subsystem (ISS) is comprised of 4 muscles: the diaphragm, transversus abdominis,  multifidus, and pelvic floor. You can see from the photo below that these four muscles form the shape of an internal cylinder.  It is the first subsystem formed in our neurodevelopmental patterning.

“If the intrinsic core of your body is unstable, the nervous system inherently restricts mobility to obtain the necessary stabilization. It locks down joints in a primal attempt at stabilization.” – Dr. Perry Nickelston (1) 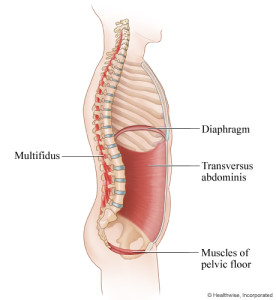 Function of the Intrinsic Core

The 4 muscles of the intrinsic core allow us to create intra-abdominal pressure and spinal stability. This stabilization enhances the transfer of force between upper and lower extremities and all other subsystems. (2)

The other four subsystems are :

Breathing and the role of the diaphragm

There are two types of breathing styles we can use.

First, if you are experiencing any breathing dysfunctions watch the video above and perform the Diaphragm RAIL. Practice crocodile breathing or use a prop to emphasize proper diaphragmatic breathing.

Once you are breathing from your diaphragm subconsciously you can begin to practice and integrate it into your rowing.

Give this a try:

Next week’s episode will cover the hip hinge and tie in the biomechanical breathing match. Leave your comments below and use the share buttons on the right to post to your favorite social media network.