Epsiode 060 of the LEO Training Podcast features two coaches from Five Points Academy in NYC. Emily Bearden and Steve Milles are both champion fighters who have had great success rehabbing their bodies through kettlebell training and enhancing performance of their fighters using this modality. 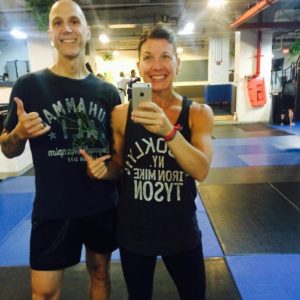 Emily Bearden first became interested in personal training while earning a BFA in Dance and Choreography, a course of study that required mastery of kinesiology, physiology, anatomy and dynamic alignment. Emily is also an internationally ranked competitive thai boxer, holding the professional World Champion belt in muay thai for the WKA, two US Championship Belts and was a member of the US Team to the International Muay Thai Federation Amateur Championships in Bangkok, Thailand. And she loves dogs, too. Emily holds the following certifications:

Steve Milles has competitive and coaching experience in muay Thai spanning more than two decades. As a competitor he won a bronze medal representing the US at the International Amateur Muay Thai Federation World Championships in Bangkok, Thailand. After turning professional Steve captured the World Kickboxing Association and International Sport Kickboxing Association US Champion belts as well as the Intercontinental Champion title for the US Muay Thai Association, battling current and former world champions in North America, Europe and Asia. He retired with a professional record of 20 wins, 8 losses and 2 draws. Steve holds the following credentials in addition to his impressive fighting background.

Here is what you will learn in this episode: